By default, EMAC OE 5.X comes with two audio packages: ALSA and mpg123. More packages and applications are available from EMAC at a customer's request.

ALSA, or the Advanced Linux Sound Architecture, is a part of the Linux Kernel and is a software framework that provides an API for sound devices. The ALSA framework includes several applications for working with sound. 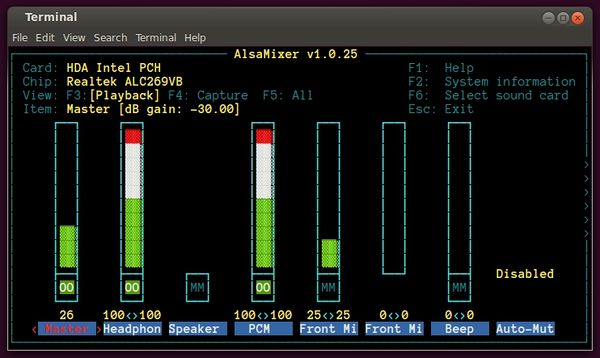 Outputting a voice identifying each channel

Outputting a sine wave tone to each channel

mpg123 is a simple and lightweight command line mp3 player. It is designed for use in front ends, in shell scripts, as an mp3 player, and as an mp3 to wave file decoder (primarily for use with CD-recording software).

To play an audio file from the command line, mpg123 must be passed the name of the file to be played.

This method, while great for shell scripts (but see below), does not support any control of the output once playback has been initiated by a human operator. To enable manual controls, the -C flag must be used.

A few of the supported command keys are:

If mpg123 needs to be run from a script, or run in the background, the -q flag should be used to enable quiet output so that nothing is printed to the screen when a the file is played.

There are a large number of other options that are available when using mpg123; too many to list in this document. These options can be viewed by passing the --help flag to the program.

This page demonstrates some of the basic audio functionality that is included with EMAC OE. The combination of ALSA and mpg123 should accommodate most typical commandline oriented audio needs. If any further audio features are required, EMAC can support them. Please contact EMAC Support for details.